Saturday 8th February allowed me to see the third weekend of the Muscular Dystrophy UK Championship league at the Lee Westwood Sports Centre in Nottingham. Working closely with The Wheelchair Football Association I was able to capture lots of this weekends action. With some AMAZING goals, outstanding team performances and once again fantastic volunteers - it is always a great weekend of sport! #PowerchairFootball #Football #powerchair #ForAll #PowerchairSoccer #Thewheelchair

The FA Disability Cup has just enjoyed its fourth year and is the largest competition of its kind in this country, ensuring that players within impairment-specific football have a national FA competition to call their own, complete with dreams of reaching St. George’s Park for finals weekend. The FA Disability Cup returned to St George’s Park on Saturday 15 and Sunday 16 June 2019 with five cup finals taking place across the weekend delivered in partnership with a range of

On Saturday 9th June, I was asked to present the Championship Top Goal Scorer award to Ryan Skinny at The Wheelchair Football Association's end of season awards ceremony at Derby County. Being asked to present this award filled me with so much pride (as you can probably tell from the MASSIVE grin on my face 🤣) and it made me feel so happy to be a part of this amazing sport. Having started photographing powerchair football in the back end of 2015, I have managed to capture hu

Following an amazing season within the MDUK National League. June 8th saw the battles of the play off weekend. Sale United maintained their premiership status after coming out on top of Norwich City. Newcastle United won all three of their games resulting in them qualifying for the MDUK Championship. Teeside PFC secured their Championship status with a 1-0 win over Evergreen. The day saw the WFA AGM as well as a workshop lead by the manager of the England powerchair team. #Po

After this weekends games THE RESULTS ARE IN... The action involved in the MDUK National League Premiership games, resulted in relegation battles as well as the champions all being decided on the final afternoon of the season! Here’s a summary of what’s happened: 🏆 West Bromwich Albion PFC 🏆 2nd - Aspire PFC 3rd - Northern Thunder Relegation playoff - Sale United PFC Relegated - Middlesbrough PFC and Leeds PFC #PowerchairFootball #Football #NottinghamshireFootballAssociatio

Today saw the fourth round of fixtures in the MDUK Championship held at the Lee Westwood Sports Centre; Nottingham. Each team battled against their opposites displaying fantastic possession and passing with an eagerness to get the end results they all deserved. Another fantastic weekend to be apart of the sport, displayed through some of the imagery here today! #PowerchairFootball #Football #NottinghamshireFootballAssociation #NTUSport #LeeWestwoodSportsCentre #HomeNationsCup

This reference is written by the Head of Referee Development of the European Powerchair Football Association (EPFA); Martin Bevan. I am the head of referee development in Europe for the European Powerchair Football Association (EPFA). At the time I have used the AXIWI equipment for training new referees at a training camp for the Scottish National Powerchair Team. It was also used for the WFA Cup Final at St. Georges Park during the FA’s Disability Cup Weekend and training of

The EPFA Champions Cup was held in Billund; Denmark - October 2018. The tournament consisted of 11 games of high speed, quality and talent to crown Grafteaux the 2018 champions of the tournament. Day ones afternoon games saw the following results: Game 1 - Court A - Auch 3 - 1 Aspire Game 2 - Court A - Grafteaux 3 - 1 Northern Thunder To find out more information about the European Powerchair Football Association please visit the following website: https://europeanpfa.com #Po

The EPFA Champions Cup was held in Billund; Denmark - October 2018. The tournament consisted of 11 games of high speed, quality and talent to crown Grafteaux the 2018 champions of the tournament. Day ones morning games saw the following results: Game 1 - Court A - DCU Storm 1 - 0 Aarhus Game 2 - Court B - Grafteaux 4 - 0 Ballerup Game 3 - Court B - Fc Inter 0 - 6 Midlands Game 4 - Court A - Northern Thunder 0 - 7 Auch To find out more information about the European Powerchair

The FA Disability Cup returned this summer with England’s top grassroots powerchair teams competing at the WFA Cup final at the national football centre, St. George’s Park, on Saturday, 16th June 2018. The competition, which is now in its third year, is the largest of its kind in this country with six cup finals scheduled to take place across the weekend in partnership with a range of impairment-specific organisations: Amputee (England Amputee Football Association) Blind (The

Had the chance to visit Nottingham Trent University's Clifton Campus this weekend to work with the Wheelchair Football Association capturing imagery of their Championship teams. Saturday saw the games take place from 9am right through until early evening, however once again due to the adverse weather conditions in Nottingham (The Beast from the East's big return) and at the venue, Sunday's Muscular Dystrophy UK Championship fixtures got CANCELED! All the games have been resch

26 matches took place this weekend in the WFA Premiership weekend held at the Lee Westwood Centre at NTU Sport. Got to see some familiar as well as new faces and once again the talent and class did not dissapoint! The league saw West Bromwich Albion lead the way closely followed in second place by Brighton & Hove Albion. I will be back in action next weekend to photograph the WFA Championship matches. #PowerchairFootball #Football #NottinghamshireFootballAssociation #NTUSport 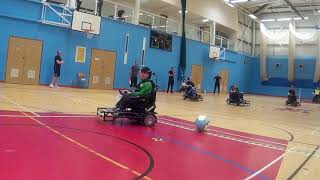 In August the European Powerchair Football Association (EPFA), held their inaugural Home Nations event, in Sevenoaks, Kent. The tournament welcomed three teams; junior sides from England and the Republic of Ireland, whilst Northern Ireland took part in international competition for the first time. It is now with great excitement that I can finally share the finished video of the Home Nations Cup. It has to be said that the sheer skill and dedication each of these players, coa

In August the European Powerchair Football Association (EPFA), held their inaugural Home Nations event, in Sevenoaks, Kent. The tournament welcomed three teams; junior sides from England and the Republic of Ireland, whilst Northern Ireland took part in international competition for the first time. The teams were competing for the Joe Barry Memorial Trophy - named after the young man who passed away last year whilst representing the Republic of Ireland at an EPFA Development c

I had the opportunity to photograph the FIRST EVER WFA Annual General Meeting. Workshop A - England DNA: Creating the Future of England Talent Colin Gordon, England Head Coach will be delivering a workshop discussing the attributes required required for a player to compete at international level. Using video analysis it will highlight how we can encourage young players to play, produce and nurture the talent of the future. Workshop B - Sustainability in Powerchair Football: C

Entry is free, and spectators are welcome to come and watch the action. Matches kick off at 9.15am each day at the Lee Westwood Sports Centre, at Nottingham Trent University. Powerchair football is the fastest growing disability team sport in the country with over 1,000 people playing on a weekly basis. More than half of the people participating are affected by muscle-wasting conditions. MDUK has entered into a partnership with the WFA. This is the first of many steps we’re t

Seeing this recent post from The Wheelchair Football Association at the Naidex show depicting their new stand with all the imagery by yours truly fills me with pride! Powerchair football is something I have loved being a part of and seeing these final results to help people understand visually just how amazing the sport is makes it all worthwhile!! (Naidex is Europe's largest professional, consumer & trade event for those with a disability or impairment.) #Nottinghamshire
1
2